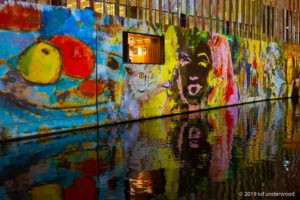 We were fortunate to be in Berlin, Germany during the thirtieth anniversary of the fall of the Berlin Wall which also coincided with the Festival of Lights.  We were in Australia earlier in the year for VIVID Sydney which we totally enjoyed and were looking forward to enjoying a similar celebration in Berlin.

These pictures were taken during a walking tour from Hackescher Market to the Brandenburg Gate around Museum Island.  The route passed many buildings and monuments holding historical and cultural significance to the German people.  Joining them in their contemplation and celebration in the crowded public squares along the route was a momentous and joyous experience.

Visiting Berlin anytime of the year would be an interesting cultural experience but to be there during the anniversary of the fall of the Berlin Wall made this trip more significant.  This long-in-coming event changed the arc of history and ushered in a new era of freedoms for peoples all around the world.  It also fomented events cultural, political and economic that are still affecting us today.  To mark this impactful event in world history in personal terms was profound and thought provoking leaving me with a sense of gratitude and appreciation for the sacrifices made by those before me.

All images were taken with Fuji X100s with 23mm f2.0 lens in RAW format, processed in Lightroom Classic 8.4.1