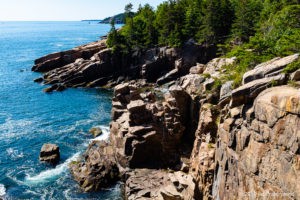 We took off for a week on the Maine coast with the expressed goal of eating our weight in lobster, crab, oysters and clams.  While I’m not sure if we met that ambitious target, it did ruin us for ever eating Maine lobster anywhere but in New England.  To say it’s delicious in all its culinary forms would be the understatement of the year.  Lobster in chowders, pasta, rolls, in tacos, salads, even with macaroni and cheese and of course in the shell, we tried it all.

While our adventure started in Boston, we were on the Bar Harbor waterfront for 4-days.  First “discovered” by Champlain in the early 1600’s Mount Desert Island has been a maritime settlement since the mid-1700’s engaged in shipbuilding, lumber and farming.  Today Bar Harbor is a resort community on the waterfront in Down East Maine and serves as the gateway to Acadia National Park, one of the most stunning parks on the east coast with trails, outlooks and mountaintops all with panoramic views of the ocean.

Using Bar Harbor as a base we explored Acadia National Park, Cadillac Mountain and the various fishing settlements on the island including Southwest Harbor, Bernard and Manset taking in the scenic beauty and culinary delights the region has on offer.   After a few days on Mount Desert Island we worked our way west down the coast with stops in Camden and Kennebunkport, each possessing a beauty and charm all their own.

It’s easy to see why Down East Maine has maintained its attraction for generations over the centuries.  It is one of the most beautiful places in the country and has a charm and appeal that’s hard to resist.  Combine this with a cuisine that has evolved over hundreds of years and you have a winning combination.  We are already planning our next adventure Down East.  Did somebody say lobster?

All images were taken with Fuji X100s with 23mm f2.0 lens in RAW format, processed in Adobe Lightroom Classic 8.3