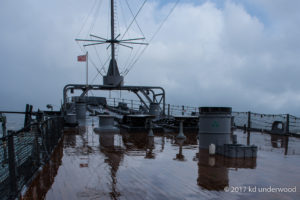 This Memorial Day we look back to a visit of the USS Missouri in December 2016.  My tour of the vessel coincided with the 75th Anniversary of the attack on Pearl Harbor, an event that has had enduring consequences for nations on both sides of the Pacific.  It’s a source of hope and encouragement to see veterans from Japan and the US visiting the same memorials, sharing stories and all happy to have survived the cataclysmic events that spun out of control steering their collective fates.

The Missouri is one of four Iowa Class battleships that survived WWII and it was on this ship that the Japanese signed the armistice with the Allied Forces.  Now decommissioned after serving in WWII, Korea, Vietnam and Desert Storm she is moored on Ford Island bow to stern with the USS Arizona which lies on under the water’s surface.  I visited on a rare rainy day in December which provided me the opportunity to have parts of the ship to myself to capture reflections in the soaked teak decks.  While I am always in awe of the courage and sacrifice of previous generations the sentiments are more poignant at monuments to commemorate their service and memory.  The USS Missouri at Pearl Harbor is that kind of memorial.