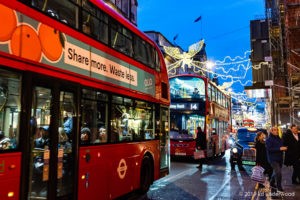 Susan and I have been to London many times, but never together so we decided to spend a week shopping, site-seeing and attending a few shows and concerts during the holidays.  London is a remarkable city anytime of the year but is particularly beautiful during the holiday season.  From Southbank to Mayfair, The City to Kensington, buildings, streets and public squares were decorated.  The shops, pubs and public spaces are warm and inviting as are the people reveling in the holiday spirit.  Of course, it rained every day and it was cold, but we prefer those conditions to the summer crowds.  It’s easy to see why people come to London from around the world to shop; the volume of places, the quality and the specialty is beyond amazing.

Taking advantage of the seasonal entertainment we attended a candlelight concert including Handel’s Messiah at St Martin-in-the-Fields performed on period instruments which in this venue had long been a dream of mine.  We also got to see the Coldstream Guards Jazz Orchestra perform Tchaikovsky’s Nutcracker Suite arranged by Duke Ellington and Billy Strayhorn.  A difficult piece under any circumstances but in full military dress in the Guards Chapel getting into the swing of this piece seemed unlikely, but they pulled it off.  It was probably the best concert of our visit.  We also saw a British musical in the West End which put us both in tears before the final curtain.   There is more going on in London than any other city in the world.

Not all was shopping and concerts; we also visited the Victoria and Albert Museum, the National Portrait Gallery, Tate Modern, Westminster Abbey, Guards Chapel and St. Paul’s Cathedral.  With so much to see and do you could spend the rest of your life and not take it all in.

So, it was a fantastic visit to one of the world’s greatest cities during the holiday season.  For centuries London was the center of royal power and influence spreading to every corner of the planet.  With a history going back over 2000 years today’s London is one of the cultural and financial capitals of the world.  We’re already looking forward to our next visit to London, England.